88%Drop in Rutland Council Houses in the Last 40 years 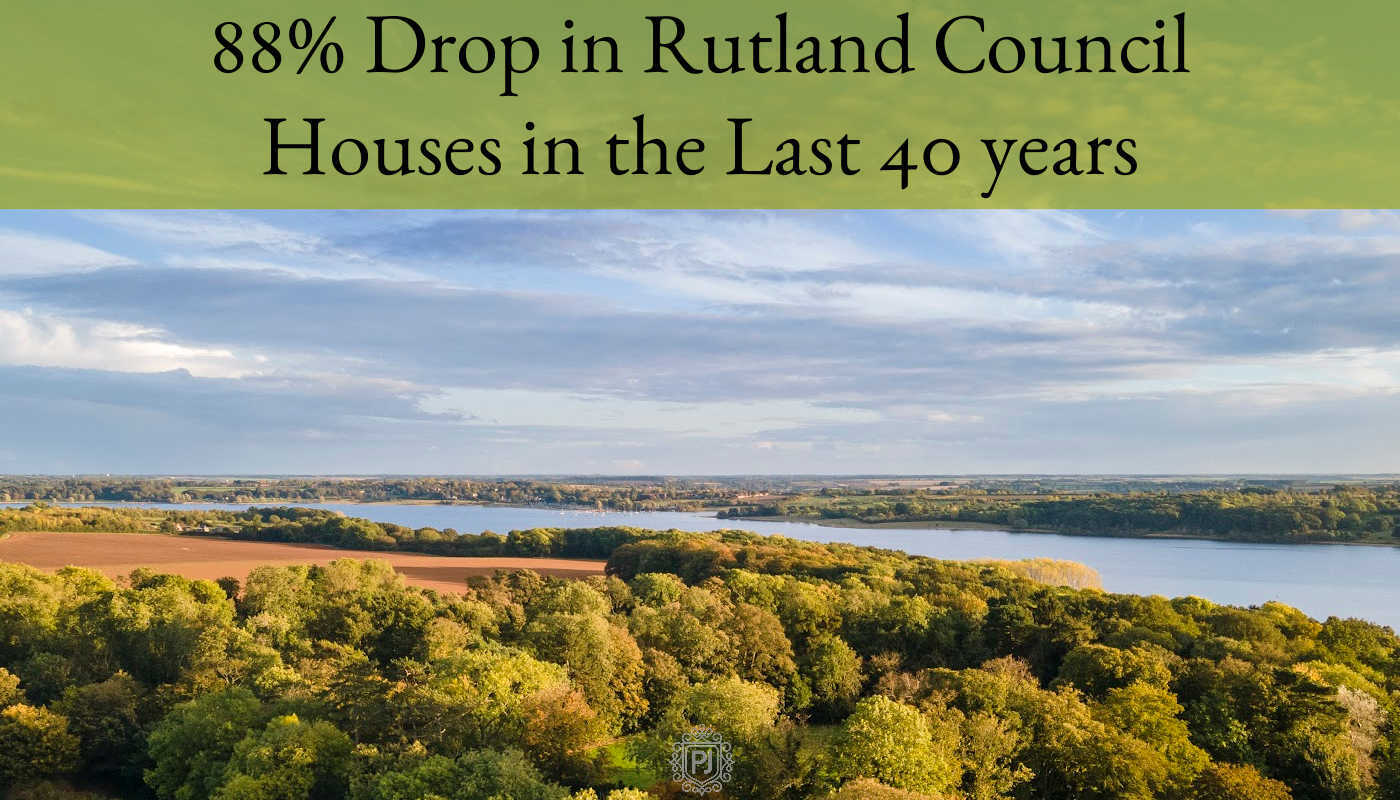 ·       How has that changed the dynamics of the Rutland property market in those 40 years?

The ability of local authorities to build council houses came into law in July 1919 with the 1919 Housing and Town Planning Act. It was one of the most important pieces of domestic legislature passed after WW1 and was the first time in the UK that a nationally public funded system of providing homes was made for the masses. It was paid for mostly by central government and provided by local authorities (councils) and public utility societies (which in later years became today’s housing associations). 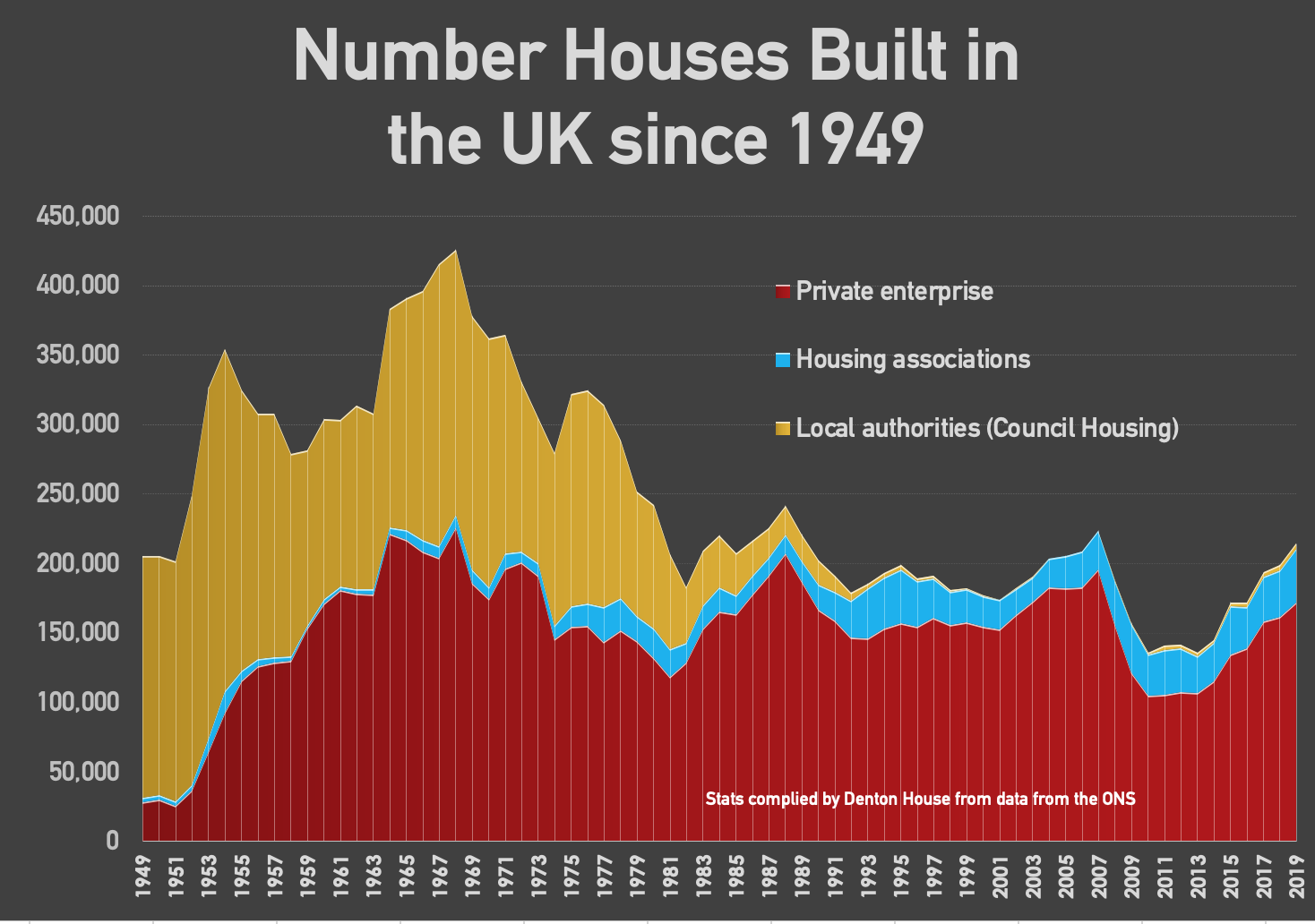 But after the General Election of 1979, the new Tory government drafted the Housing Act 1980, which gave the Right to Buy, which became law in the autumn of 1980. Then things really took off!

This new law established a right for most council tenants who had been in their home for three years or more to a discount. The discount started at 33% and increased by 1% for each extra year, up to a maximum of 50%. If the tenant sold the house within the first five years of ownership, a prorated repayment of their discount was required.

nationally were sold at a discount.

Yet the issue was, when a council house was sold, it took that house out of the council’s portfolio for future generations. From the start, there were limitations on local authorities’ use of monies from the council house sales as most of it had to be given to central government in London, meaning only 390,560 new council houses were built between 1980 and 1989. Looking at the numbers locally …

No wonder the country has a housing crisis ... yet as my regular readers know - the devil is in the detail … and that devil is the humble housing association.

At the time, there were only 400,000 housing association properties in the country, so the Government were not that worried. But the significance of housing associations developed in the 1980s and beyond as they were allowed to borrow money from the private sector.

Also, the Government encouraged councils to transfer their remaining council houses to housing association schemes from 1986. The advantage to these ‘stock transfers’ was the Government allowed housing associations to access private funding to improve their existing properties and buy new ones (good news for existing tenants complaining that the local authority never upgraded their homes).

Moreover, the Tory Government liked stock transfers, as it allowed them to dismantle council housing from the inside. Interestingly, Labour expanded the ‘Stock Transfer’ process in 1997 and further reduced the eligibility for council tenants’ Right to Buy, meaning the number of council tenants exercising their Right to Buy declined considerably.

Meaning today, even though the provision of council housing has dropped like the proverbial stone …

the number of housing association properties in Rutland has increased from 88 in 1981 to 1,316.

So, how has this changed the dynamic of the Rutland property market in the last 40 years?

Would it surprise you to learn that the number of people who own their Rutland home today is very similar to what it was 20 years ago before the property boom started? It’s just that even though we’ve had a large drop in the number of council houses and an increase in the number of housing association properties, the number of people owning their home has remained relatively the same (in some areas of Rutland this has actually increased), the significant issue is the growth of the private rented sector in Rutland.

from a private landlord.

The question is, is it right for private individuals to make money from tenants who rent from them as opposed to the local authority? Or are private landlords providing better types, choices and quality of accommodation for these tenants, albeit at a higher rental rate than if they rented a council house?

I really do believe if it wasn’t for the growth of the buy-to-let landlord, which began in the early 2000s, we would have an even bigger housing crisis on our hands than the one we have currently.

Both local and central government have had their hands tied behind their backs since 2008 with a lack of funding, and it’s the humble private landlord who has stepped up and supplied in excess of 2.3million additional rental properties since 2001, housing nearly 5,520,000 Brits. These landlords have saved the day since the big council house sell off in the 1980s!

What are your thoughts on this matter? Do let me know.