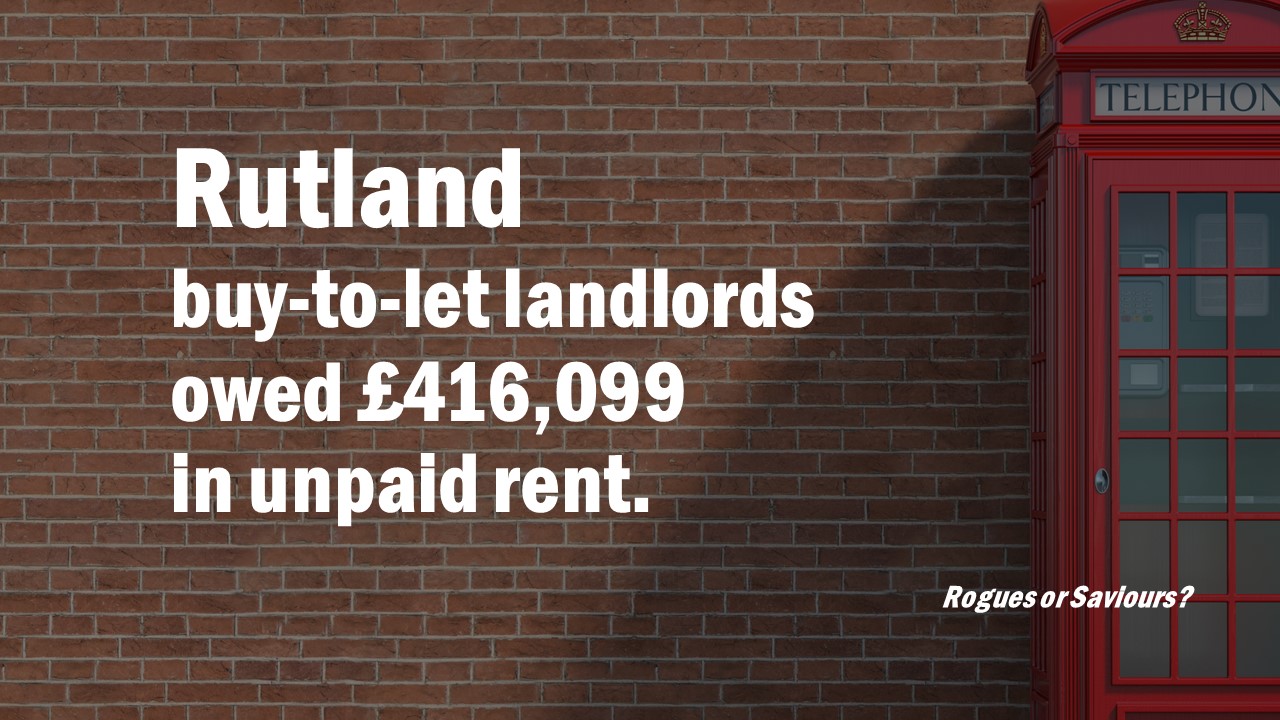 There is no getting away from the fact that the rise in the number of buy-to-let properties in Rutland has been nothing short of astonishing over the last twenty years. As a result, many in the press have said Britain is a broken nation, with many twenty and thirty-somethings unable to buy their first home. The press has named this group ‘Generation Rent.’

Rutland landlords have been accused of scooping up all the smaller Rutland properties for their buy-to-let property empires. Others blamed the Government (of both persuasions) for pouring petrol on the buy-to-let fire for giving landlords an unfair advantage with the way buy-to-let has been taxed in the past. Many have said these landlords have priced out Rutland's 'Generation Rent'. Many say they are rogues, and you can see why there is little sympathy for landlords, especially as …

– easy money or what?

So, as we come out of lockdown, I want to make a stand for Rutland landlords and talk about the great work they have been doing during the pandemic.

Since lockdown, it has been (almost) illegal to evict a tenant from private rented property. Yet, in the last few weeks, this ‘ban on evictions’ has begun to be eased, making some commentators forecast a ‘tsunami of homelessness’ as landlords ready themselves to kick out the tenants who cannot pay their rent.

You might say they can afford it, yet I need to highlight an often-untold story in the massive numbers of Rutland landlords who have co-operated with their Rutland tenants to evade eviction.

The personal finances of some Rutland landlords and tenants have been ruthlessly strained during the last 16 months — something that is going to have ramifications on the back pockets of both landlords and tenants, as well as the attraction of being a buy-to-let landlord (more of that later).

188 Rutland tenants are in arrears with their rent

That's money these landlords need to pay their mortgages with and even to live off themselves.

The eviction ban was imposed in March 2020 and the Government has expected private landlords to stand the cost of their tenants’ rent if they could no longer pay. It was estimated over 1 in 5 landlords with mortgages had requested a mortgage payment holiday in 2020. Thankfully, that now stands at 1 in 100 as most Rutland landlords with shortfalls in rent have been using their own personal savings to cover the mortgage payments.

I have seen so many landlords giving their Rutland tenants rent breaks and discounts to help them through these times. However, most landlords I talk to acknowledge that it is better to have a tenant paying something rather than a tenant paying nothing, hoping that total rent will start flowing as the economy recovers.

Going into the pandemic, 1 in 25 Rutland tenants were in arrears, yet that now stands at 1 in 11.

So, are we going to see lots of evictions? I would go as far as to rebuff the idea that we will see a rush to the courts of landlords to obtain possession orders now the eviction ban has been lifted. I have always viewed evictions as a last resort.

Before the pandemic, it took about 12 months for courts to hear rental repossession cases, so this backlog will be nearer two years (if not more). Nonetheless, the threat of a County Court Judgement (CCJ) often makes tenants pay up as it will demolish their credit rating, making it very challenging for them to rent another home.

I feel for those Rutland tenants under furlough or reduced hours as they have the quandry of wanting to reduce their outgoings by moving to a cheaper rental property, yet whose rental deposits will be sacrificed to cover their rent arrears. However, some have said that because house prices have exploded during the last 16 months, Rutland landlords should write off their tenants’ arrears as a goodwill gesture.

The issue is, 335 Rutland landlords only have a single property for rent, so the arrears would have to be funded by their personal savings.

For them, the pandemic experience could be the incentive to sell up for good.

A National Residential Landlords Association survey found around a third of all landlords were now more likely to sell their buy-to-let properties altogether or sell some of them. This would mean fewer properties for tenants to rent, thus driving up the rent.

According to government and industry data, evidence suggests that a tenant who rents a property directly through a landlord and not through a letting agent is between two and three times more likely to go into arrears of 2 months or more. Is this because tenants know that private landlords who advertise directly for tenants on Gumtree and other platforms don't carry out the checks letting agents do on them?

Many of those landlords are switching the management of their property to an agent, and for those landlords sticking with self-management of their property, there is circumstantial evidence they are starting to become a lot pickier when starting new tenancies. Even though illegal, spurning tenants on benefits is woefully all too common. I also worry there could be a stigma about renting properties to self-employed people because of the erratic nature of their income.

Looking into the future, I envisage a growth in the use of ‘rent guarantor contracts’, whereby the tenant is called upon to provide a 3rd party person to pay the rent if the tenant doesn’t. These are pretty common for student lets and those on certain benefits, and it wouldn't surprise me if these are used more often for self-employed tenants and regular professional lets.

That is why I believe Rutland landlords should be celebrated ... most of them have been saviours.  These are my thoughts - what are yours?