Stamford Property Market What is going to happen to Stamp Duty on 11th March? 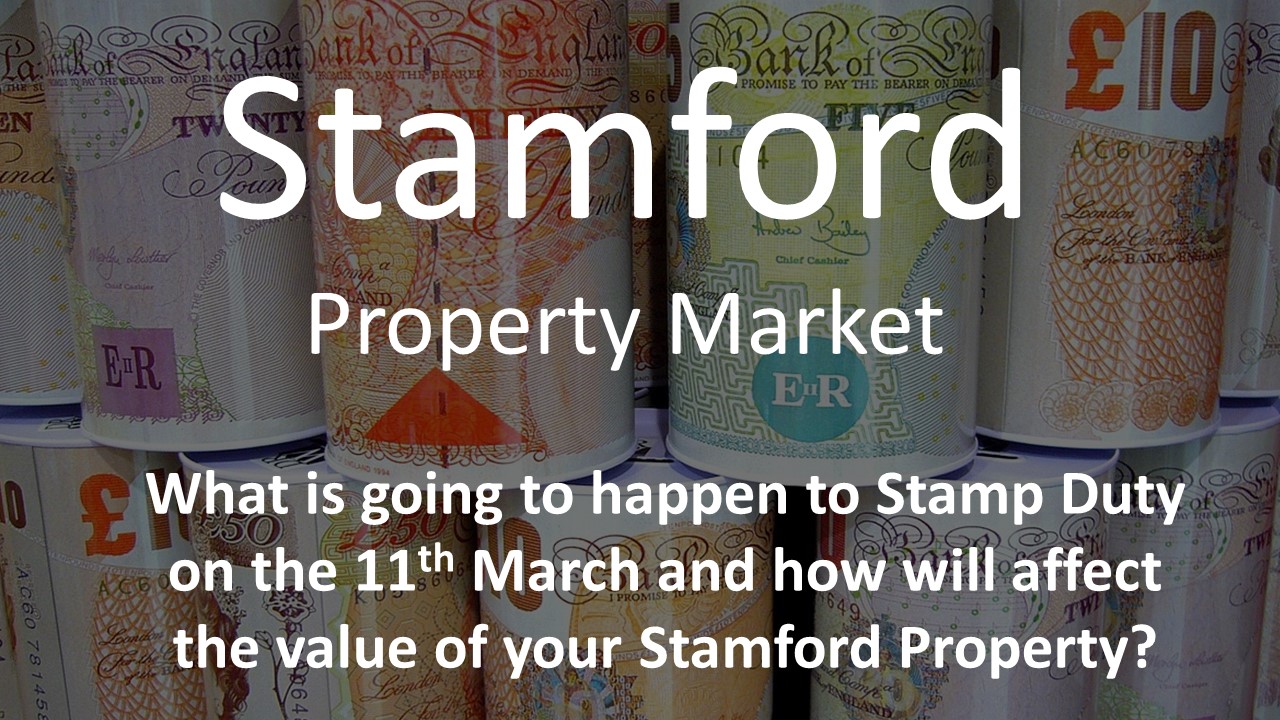 If you are buying a home in England costing more than £125k, you will have to pay Stamp Duty Land Tax on the purchase of your new home.  In the provinces, it’s called something slightly different, so if you are buying a property in Scotland over £145k you will pay Land and Buildings Transaction Tax (LBTT) and for any property over £180k in Wales you will pay Land Transaction Tax (LTT).  Whatever the tax is called, it is an important factor when moving, when you consider that ...

Now as soon as the date for Rishi Sunak’s budget was set for 11th March 2020, conjecture in the press began about what stamp duty changes he may disclose on budget day. The Chancellor only sets the budget for England and Northern Ireland, yet this is just as relevant for Wales and Scotland.  Even though Derek Mackay, the Scottish Finance Secretary said on 6th February he has no plans to change Scotland’s version of Stamp Duty (LBTT), more often than not, Stamp Duty rule changes in England are often adopted in Wales and Scotland at a future date.

Some are asking if Sunak will impose what was promised in the Conservative manifesto with the 3% additional Stamp Duty surcharge on non-UK resident buyers?  I have certainly heard in the Estate Agent community that foreign buyers are trying to rush through their sales in central prime London (Park Lane/Mayfair etc etc) before 11th March to ensure they don’t get hit with a new tax.  Or will he go even further, and will we see a reappearance of Boris Johnson’s hitherto specified aim of eliminating Stamp Duty below £500k, consequently theoretically saving homebuyers many thousands of pounds?

However, opinions are divided on what, if anything, will be included in the budget

Most believe that the extra 3% for foreign nationals is an almost certainty, and if it isn’t implemented straight away, it will be in the Autumn Statement.  Many believe the Chancellor could also decide to repay the favour to those in the North who turned the Election map ‘blue’ on the evening of 12th December with actions to enhance the housing market north of the M62 with stamp duty changes.  The best way he could do that is to raise the threshold from the current £125k.

When Boris ran for Tory leadership back in May 2019, he said that he wanted to expand the threshold at which you begin paying stamp duty from £125k to £500k, which when you consider 7 out of 8 residential sales in 2019 were for homes below £500k, that would have a considerable effect.  If the Stamp Duty threshold had been raised to £500k in 2019, then 700,400 homebuyers in England would not have paid any Stamp Duty Tax.

84.1% of Stamford properties sold last year were below £500k

Of the 603 properties sold in the last 12 months within a three mile radius of Stamford, 96 of those properties sold were over £500,000 (interesting when compared with Greater London where 44.9% of properties were below the £500k level).

Yet the cost to the HM Treasury would be significant.  If all properties below £500k were exempt, the government would lose £2.22bn in tax receipts according to Savills.  Of course, this could be made up with extra tax on empty properties or increasing the second homes Stamp Duty levy from the current 3% to say 5%, which would raise an additional £1.12bn on top of the current £1.68bn it raises for the Treasury, yet it would have a negative effect on buy-to-let landlords buying additional homes.

This would stall the property market, would probably cause political fallout among 688,300 homebuyers who paid Stamp Duty last year alone, make homes ‘appear’ more expensive as house sellers would inflate the asking price to try and recoup some of the tax, yet ultimately could be seen as ‘re-arranging the deckchairs on the Titanic’.

The 3% additional levy for foreign buyers is almost certain (of which we don’t get many in Stamford – as they tend to buy in prime London areas which is of course the City of Westminster and the Royal Borough of Kensington & Chelsea, and parts of the boroughs of Hammersmith and Fulham, and Camden), yet I have a feeling that ultimately the Government doesn’t want to rock the boat on the wave that is being rode by the property market on the ‘Boris Bounce’ since December.  I also doubt any changes will be made to first time buyer Stamp Duty relief, as 22% of all property transactions in 2019 were to first-time buyers, and whilst it cost the Treasury (or saved the first-timer buyers) a total of £539m in Stamp Duty relief (an average of £2,411 each), the Government are keen for first time buyers to get onto the housing ladder.

Ultimately, we can only wait until Mr Sunak opens his red leather box on 11th March to find out what will happen.  I will, of course, report back after 11th of March on what (if any) changes to the tax regime will affect the Stamford property market going forward.

If you have any questions regarding Stamp Duty and how this may affect you, why not give me a call?