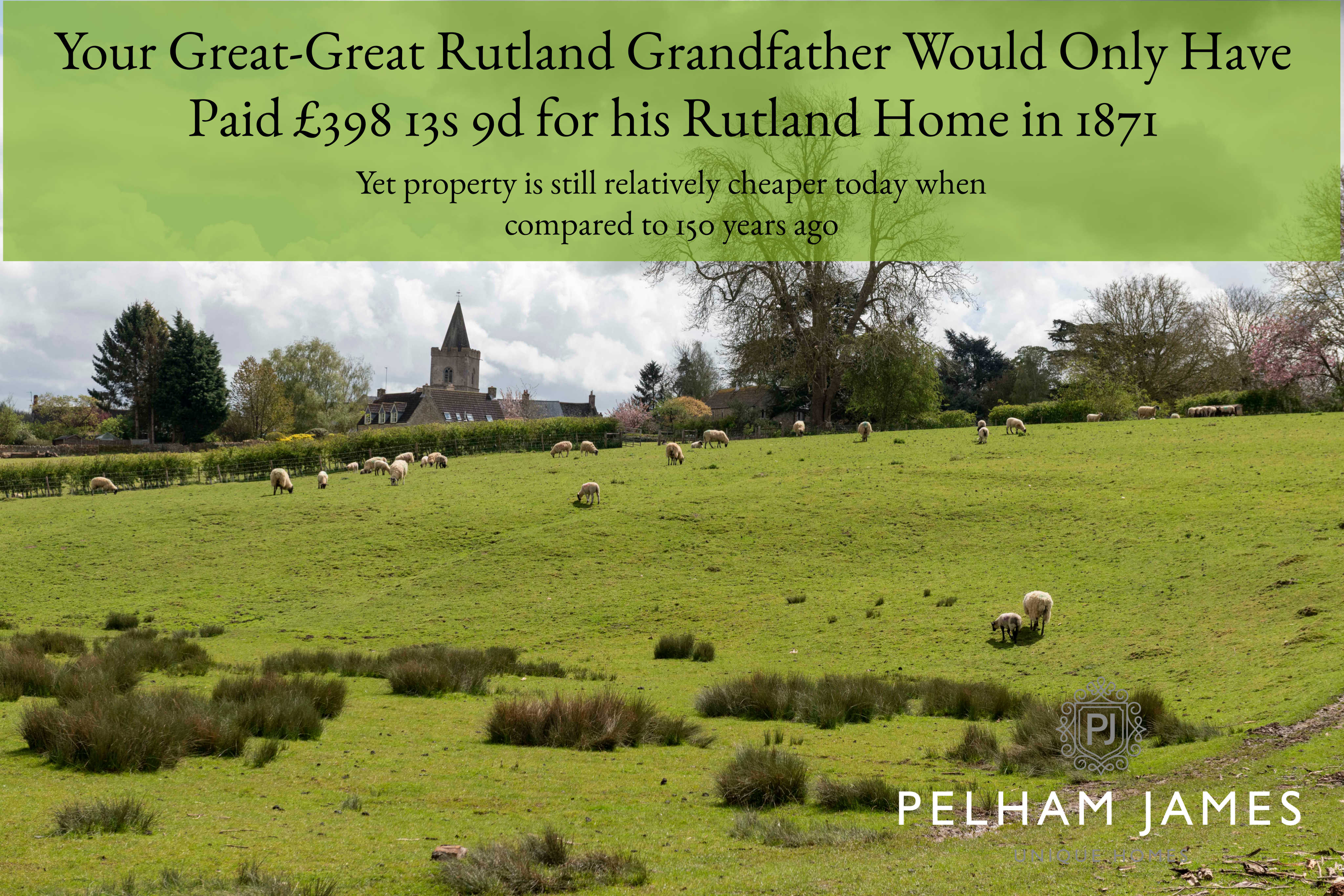 Would it surprise you even more when I said the ratio of house prices to wages are still lower today when compared to 1871?  Yes, you read that correctly, as a proportion of average wages British house prices are 17.6% proportionally cheaper today than they were in 1871.

I want to talk about the last 150 years of the British property market and later in the article, the Rutland property market. I will also touch on why before the 1900s, buying a home in Rutland was considerably more expensive than today and why that changed.

So, let’s look at some interesting stats to get us started:

I stated in the first part of the article it was more expensive to buy in the latter parts of the 19th Century than today. It may only be of historical interest, but back in 1871, the ratio of average house prices to average wages was 10.5 to 1 (i.e. the average house was worth ten and half times the average person’s wage), whilst today it stands at 8.8 to 1.

Interestingly, for the next 45 years, that ratio went on a downward trend relative to wages and only stopped falling after WW1, where the average house was worth only 2.2 times the average wage. This made houses more affordable and set the foundations for the homeowning passion we Brits have today.

So why did this happen, what can we learn from it and what does it mean for Rutland homeowners and Rutland landlords?

There are three significant drivers that made property a lot more affordable between 1871 and 1911: the Victorians built more property, made them smaller and people's wages rose significantly.

·       In 1871, the average plot size of a property was 0.23 acres, yet by 1911, that was down to 0.06 acres (or a plot of 72ft by 40ft). This came about from building smaller types of property (i.e. a change away from larger Georgian detached houses towards the infamous rows of Victorian terraces), and a downshift in the average size of houses within each category.

So, by 1911, the average Rutland property had dropped

N.B. – you might have noticed I wrote £399 in a slightly different way in the title of the article. Up to 1971, a pound was split not into 100 pence but 240 pence. There were 12 pence in a shilling and 20 shillings (or 240 pence) in a pound. It was expressed in the form £sd and spoken as "pounds, shillings and pence". I dropped that into the title as it’s the 50th anniversary this year of when the UK decimalised its currency (younger readers – do google the story – it’s a fascinating topic).

So back to the property market, and at the end of WW1, four in five people still rented, virtually all from private landlords. Politicians were concerned about the poor living standards of people’s homes, and this led to the ‘homes fit for heroes’ 1919 Housing Act which delivered subsidies for local councils to build council houses. The average value of a Rutland property in 1922 was £465.

The 1930s - By 1930, the average value of a Rutland property stood at £588. With the country building a third of a million houses per annum, interest rates fixed at 2% and hardly any planning regulations, supply of property was outstripping demand, so the average Rutland home dropped ever so slightly in value to £543 by 1938.

The 1940s - With the bombing of many towns and cities and housebuilding being stopped because of the war, this created a perfect storm to increase house prices after the war. By 1947, the average Rutland home had risen in value to £1,818 because just as food was rationed during and after the war, so were building materials. Builders could spend no more than £350 on building materials for a new home (and that lasted until 1954).

The 1960s - This decade saw even more houses being built in the UK, with an average of a third of a million houses a year being built. Rutland is full of 1960’s council houses and now even more owner-occupied housing, meaning by the end of the decade Britain had as many homeowners as renters. The average Rutland house had risen in value to £4,625 by 1969.

The 1970s - We experienced the first boom and bust housing bubble in the early 1970s with house prices rising by over 30% a year in the early years of the decade (so the current 10% a year is child's play!) but prices dropped in 1974. They recovered quickly in the following years, not because of increased demand but due to hyperinflation, making the average Rutland house price rise to £23,519 by 1980.

The 1980s - This was the decade of council tenants being able to buy their own homes, although not many people know it was an idea from Labour. They decided against the idea, but it was seized upon by the Tories, who made it the cornerstone of their 1979 election manifesto. The property market helped improve the economy, and by 1988, Rutland property values increased to £49,194 (only to drop by 32% a couple of years later).

The 1990s - The housing market crash of the early 1990s was painful for all, exacerbated by mortgage interest rates being raised to 15% on Black Wednesday (16 September 1992) and left there for 12 months. Unemployment went from 1.5m to 3m for the second time in ten years, and many of those homeowners who had taken out large mortgages in the late 1980’s housing boom could no longer afford the repayments because of the high interest rates, meaning repossessions went through the roof. The crash also made builders nervous, and they only built 150,000 houses on average a year in this decade. Yet, by the mid-1990s, things started to improve. So much so, the average Rutland home was worth £92,219 by the turn of the millennium.

The 2000s - The decade of cheap mortgages and the rise of Buy-to-Let, together with a severe drop in the number of new homes being built, contributed to the UK’s third big housing bubble since WW2. The average Rutland house price more than doubled to £246,956 by 2008, before the Credit Crunch brought the boom to an end, and a year later (2009), the average Rutland property had dropped to £219,345.

The 2010s - The property market started to come back to life in the early 2010s with property values steadily rising throughout the decade, yet builders were only building around 135,000 new homes a year. It also might surprise you that by 2015/6, the number of homeowners was starting to rise quite significantly, meaning today, as we enter the 2020's decade, the average value of a Rutland property now stands at £341,961.

Yes, your Great-Great-Grandfather might have been able to buy their Rutland house for a shade under £399 in 1871. Taking inflation into account since 1871, that same Rutland house today would be £48,025.42, yet if his wages had increased by inflation at the same rate, the average wage today would be £81.91 per week, not the current £585.50 per week.

I appreciate there are plenty of other factors involved with this topic, such as the cost of renting, raising a deposit, changing lifestyles and the biggest point, the cost of borrowing money on a mortgage.

All this begs the question, what does the future hold for the Rutland property market?

It's obvious since the mid-1980s, house prices have sustained a period of impressive growth (even withstanding a couple of property crashes). The Bank of England has gone on record to say that much of the rise in average house values, comparative to wages, between 1985 and now can be seen because of a sustained, dramatic, and consistently unexpected decline in real interest rates and additionally concludes that: ‘An unexpected and persistent increase in the medium-term real interest rates will generate a fall in real house prices.’

Cheap mortgages and a lack of building have created this situation. So as long as interest rates don’t go back to their long-term average of the 5% to 7% range or the Government decides to increase building new homes to half a million a year (from the current 240,000 per year) ... things will carry on as they are in the medium to long-term.

These are my thoughts. I would love to hear any stories of your family buying property in the late 19th Century or early 20th Century and what they paid for it, together with the affordability of Rutland property and the future of it.  Do drop me a line, I'd love to hear from you.